ORGANIZATION OF TRADE AND CUSTOMS 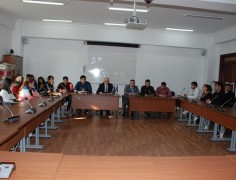 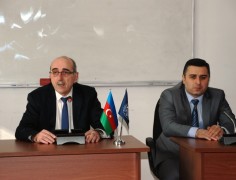 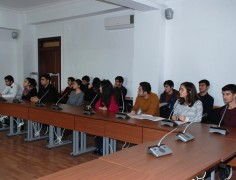 A Seminar on “Strategic Roadmap for the Development of Logistics and Trade” held at UNEC (24.01.2017)
Round- table discussion held at UNEC: “Export- oriented Clustering in Condition of Macro- economic Reality” (18.12.2015)

Employees of the department have published more than 20 textbooks, teaching facilities, monographs and methodical aids. Textbooks on “Customs Organization”, “Customs Expertise”, “Customs-tariff regulation of foreign economic activity” and “The History of Customs in Azerbaijan” were prepared and given to students. Particular attention is paid to scientific-research works carried out at the department. Employees of the department have carried out state budget research works on the topics “Modern problems of ensuring the country’s economic security” and “Problems of the use of export potential of Azerbaijan”.

The laboratories of “Customs business organization”, “Customs expertise” are functioning under the department.

*
Trade. Training of cadres on commercial specialties began on the day of the first establishment of the higher school. It is no coincidence that the first economic institute, founded in 1930 and forming the basis of our university, was named Trade and Cooperative Institute. Regardless of which higher education institution has been involved, training in trade has never stopped, but on the contrary, it has developed into a rising line. One of the faculties of the newly established Trade and Cooperative Institute was the Soviet Commerce School, which is a trade union commodity. The chair, directly responsible for this area, was called the “Economic organization and techniques of Soviet trade.”

In 1968, another department called “Trade Organization and Technology” began functioning. The new chair was led by Prof. M.Zeynalov. In 1979-1981, the position of the head of the department was occupied by Prof. C.P.Pashayev. In 1989, the Department of “Trade Economics” and “Trade Organization and Management” was united and the new department “Economics and Management of Trade” was established and headed by Can. of Economic Sciences, Assist. Prof. Sh.H.Hajiyev. In 1992-2005, the department was headed by associate professor T.M.Mammadov, in 2005-2013, Dr. of Econ., Prof. K.Pashayev and Assist. Prof.  Maharram Akbarov.

In 2004, the Department of “Trade” was established on the basis of the Departments “Commerce”, “Advertising business” and “Trade and Marketing”.

Currently, the department “Trade” trains bachelors and masters in the following three specialties:

*
Many textbooks have been published by teachers of the department. Among them are: the textbooks “Economics of Trade” published by prof. I.A.Feyzullabeyli and other teachers (2006), textbook on “Organization and Commercialization of Trade” prof. T.M.Mammadov (2008), Assist. Prof. M.G.Agamaliyev, “Organization of Commercial Activity” (2006) by Assist. Prof. M.A.Allahverdiyeva, “International Marketing” (2007), by prof. I.A. Faizullabeyli, Assist. Prof. E.Ibishov and H.Israfilov, textbook “International trade business” (2000) by Prof. A.H.Samadov, “Management of the market” (2005) by Prof. K.Pashayev’s, “Management of trade” (2009), “Fundamentals of commercial activity” (2010) and others.

Several textbooks have been translated into Azerbaijani from the Russian language and published in the university publishing house. Among them are L.Fedotova’s “Advertising in the Communication Process”, Mark U.Conston, “Sales Department Management” by Graham U.Marshall, “Trade, Money, Mentality”, “Conflict Service” and others.

In addition to teaching, the department has been formed as a scientific and methodological center for commercial problems. The research work on the topic “Socio-economic problems of the development of market economy in the market economy” was devoted to the country’s economy and covers scientific problems such as “Investigation and management of the commodity market”, “Development trends of advertising”, “Advertising market”, “Problems of employment of the population in trade” , “Problems of production and sale of food and nonfood goods”, “Problems of complex market research and forecasting”, “Problems of commercial and innovation”, “Strategy formation of commerce” and others.

Members of the department have taken active part in the scientific researches carried out in the territory of the USSR. The Department of “The Production, Sales and Main Areas of Service Management” of the All-Union Scientific-Research Work, related to the Caucasus and Central Asia region, was implemented by the staff of the department. The two largest divisions of the book “Socio-Economic Development Problems of Baku”, one of the most prominent scientific-research works of the 1990s, were written by associate professors Sh.Hajiyev and A.Samedov.

E-Library of the Department

Information about the publications of 2010-2013