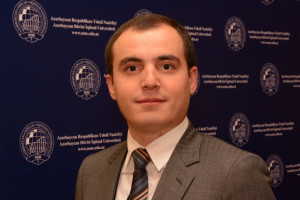 was born on February 10, 1986 in Baku city in the family of workers. He went to 1st class in 1992 at the secondary school #80 of Baku city, continued his education at the school #153 after 9th class and graduated from the same school in 2003. He was admitted to the Finance-credit faculty of the Azerbaijan State Economic University in 2003 and graduated from the University in 2007. He got a 6-month training courses in England from December 2005 to May 2006 in order to improve his foreign language skills.

He entered correspondence courses of the master degree of the Finance-credit specialty at the Azerbaijan State Economic University in 2007, but has to suspend his education for military service. He serviced at the military forces from July 25, 2007 to July 25, 2008. Afterwards, continued his education and successfully completed master degree on the finance credit specialty in 2011.

He worked as the controller operator, specialist at the Rabita branch of the Kapital Bank OJSC (former BUS Bank) from October 2004 to August 2005.
He worked at the specialist of the “Centralized credit register” service of the Central Bank of the Republic of Azerbaijan (former National Bank) from November 2008.
He was the deputy director of the Shusha branch (branch #2 in former Binagadi district) of the Kapital Bank OJSC from May 2010 to January 2014.
He occupies the position of the chairman of the Trade Union Committee of the Azerbaijan State Economic University from January 2014 up to now.