He was born in 1944 in Gazakh region. In 1968 he  graduated  from  Azerbaijan Institute of  Petroleum and Chemistry. In 1976 he defended his dissertation. In 1984 he was awarded the title of associate professor, and in 1993 he was awarded the title of professor. In different years he worked as a dean and vice-rector at Azerbaijan Institute of Technology, in 1998-2000 as a vice-rector of academic affairs and head of the department at Baku State Institute of Commodity and Commerce, in 2000-2016 as a director of the Derbent branch of UNEC.

He is the author of more than 60 scientific articles, 1 textbook, 2 training aids, 3 certificates of authorship.

On the occasion of the 85th  anniversary of UNEC he was awarded “Advanced education worker” badge for  raising the level of education, successful integration into world standards and world science, as well as the formation of the young generation studying at the university as highly qualified specialists, as well as for the activity for their formation as an intellectual, a person who embodies the love of country, nation and state. 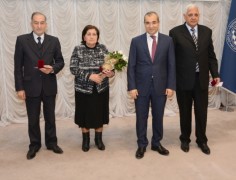