Director of UNEC Zagatala branch, Professor Orujali Rzayev said during the period of his power, Great Leader Heydar Aliyev always paid attention to the army building, the improvement of the armed forces and strengthening of its material and technical base, training of national military personnel. Due to the activities carried out by the President of the Republic of Azerbaijan, Supreme Commander- in- Chief Ilham Aliyev the Armed Forces have been modernized and became the most powerful army in the region. Today, the Azerbaijani army has the power to restore the territorial integrity of our country by the Supreme- Commander in Chief’s order. The Branch’s teacher Muslim Aliyev made a report on “Azerbaijan Armed Forces- National Army building”.

A film dedicated to the Armed Forces of the Republic of Azerbaijan was demonstrated during the event. 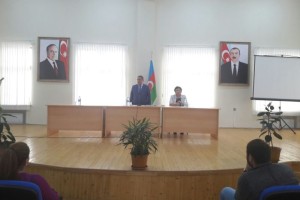