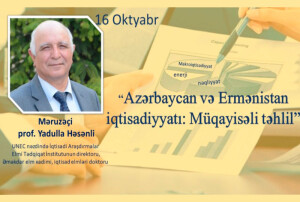 Scientific seminars on comparative analysis of economic development indicators of Azerbaijan and Armenia start at UNEC.

In the first seminar the economic indicators of the macroeconomic, energy and transport sectors of both countries have been analyzed. It was noted that Azerbaijan is many times better than Armenia in terms of development in terms of GDP (4 times), international reserves (20 times), energy supply (4.6 times), transport (more than 20 times).   According to the results of the analysis conducted at UNEC, it was proved once again that Azerbaijan’s economy is strong and Armenia’s is weak.

In 5-day seminars organized by  UNEC Institute for Economic Research (IER) the macroeconomic, energy, transport, health, science, education, ICT, agriculture, tourism and other sectors of the two countries, as well as the position of the Azerbaijani and Armenian economies in international rankings will be discussed and the results of the comparison will be presented to the public.

Inonu University of Turkey sends a letter to UNEC in support of Azerbaijan
UNEC’s support campaign to the Armed Forces Assistance Fund continues
Azerbaijani and Armenian economies: Comparative analysis
Three UNEC students successfully complete an international bachelor’s program of the University of London/London School of Economics
UNEC brand is recognized by another European country
UNEC transfers 100,000 Azerbaijani Manat to the Armed Forces Assistance Fund, and the process continues
ALL NEWS