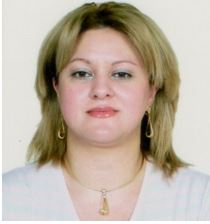 In 1978 entered school N5 in Nasimi district in Baku City.

In 1979 entered Music school N20.Finished it in 7 years with Musical Diploma (Fortepiano).

In 1989 I entered the Institute of Foreign Languages (The English Faculty).

In 1993 graduated from The University of Foreign Languages with First class Diploma.

From 1993 till 2001 I worked at KHAZAR University, as an English teacher at the Department of Foreign Languages; taught English.

Since 2001 till now I have been working as an English teacher at the Department of Foreign Languages at Azerbaijan State University of Economics.

During my working time I published for about 20 articles, tests and 4 books in Baku city and abroad. Noted scientific works were published as materials of Foreign Conferences.

Family status-Married; 2 children-a daughter of 22 years old and a son of 19 years old.