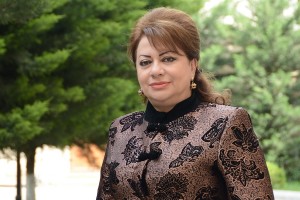 She started the secondary school No. 54 in 1961 in Nasimi district of Baku city.

In 1978 she graduated the Central Special Music School named after A.Zeynalli (piano teacher) and Police Academy of the Ministry of Internal Affairs of the Republic of Azerbaijan in 1986.

She has served in the Ministry of Internal Affairs from 1975 until 2009.

She is the head of Military and special department since 2009 till the present time. She has one child.