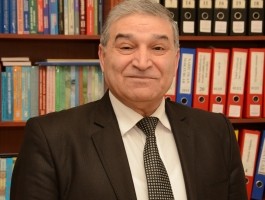 In 1961 he went to school in Agjabadi, continued his education in Oguz, and finished the school No.3 in Zagatala in 1970.

In 1971 he entered the Azerbaijan Institute of National Economy. After graduating from the Institute in 1976, he received a degree in political economics teacher. In February, 1977 as per the assignment he began to work in the capacity of Methodist in the Scientific-Methodical Council per Economical Education of the Ministry of Higher and Secondary Education.

From April, 1977 to December,1978 he passed military service in the army. In April 1982, he was transferred to the Methodist position in the educational-methodical cabinet of the Ministry of Secondary Education of the same ministry. Since March 1988, he has worked as a chief Methodist and head of the cabinet in the Educational-methodical centre of the Republican Ministry of National Education. From April 1990 to December 1991, he was appointed as an inspector of the Ministry’s department of teaching social sciences. From December,1991 to June, 1992, he worked as inspector at the department  for organization of educational affairs and to February, 1993 at the department of  pre-school institutions. By the order of the Ministry of Education since February 1993, he has been transferred to the head of the University’s human resources department. Since June 2000 till now he has worked as head of the University’s human resources department.