A series of events on the eve of the National Leader Heydar Aliyev’s 94th anniversary are being held at Zagatala branch of UNEC.

The academic staff of the University, students and the representatives of the local residents attended the next event held on “Heydar Aliyev’s Political Portrait”.

After the National Anthem was sounded, Director of the branch, Professor Orucali Rzayev spoke about the National Leader Heydar Aliyev’s social and political performances, his historical contributions made for the State and people of Azerbaijan, emphasized that our country gains great achievements as a result of the strategic development course defined by a genius personality that is successfully continued by the President Ilham Aliyev. Characterizing the Great Leader as a Personality of all times, O.Rzayev brought to attention that the architect and founder of the independent Azerbaijan also was a decisive patriot of education and enlightenment. The Director especially stressed that the promotion and instilling of Heydar Aliyev’s heritage to young people deeply is the idea and goal of today’s event.

The report was of great interest and attention. A documentary film dedicated to the National Leader Heydar Aliyev was demonstrated after the report.

Events dedicated to the 94th anniversary of the Great Leader’s birthday will continue until May 10. 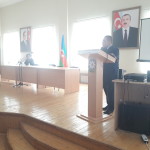 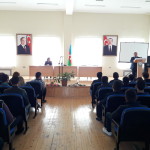 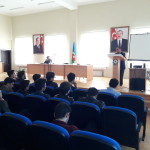