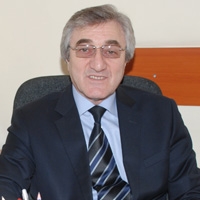 In 1981 he defended a thesis in Kiev Institute of Trade-Economy and got the degree of Candidate of Economic Sciences.  At the moment he is about the defense the thesis on doctor’s.

Ass. Pr. H.A.Israfilov began his activity in  the Azerbaijan Institute of National Economy as a senior laboratory assistant, then he got promoted as a teacher, senior teacher, vice-dean of the faculty “Trade-commodity research”, and a dean of the faculties “Commerce” and “International Economic Relations”. Since 2005 he is Master Preparation Center’s director in ASEU.

For the achievements got in education he was named “An Honored Teacher” by the Azerbaijan President’s decree issued in 2006.

His activities as the resourceful organizer of the science, education and training process in Azerbaijan  were highly appreciated and in 2005 by the decisions of Award Commission of the International Scientific Centre “Vector”  he was awarded with the international diploma of well- known intelligence of the XXI century.

Ass. Pr. H.A.Israfilov introduced our country in many congresses and symposiums held in foreign countries. He is the author of more than 100 scientific researches, monographers, text books, educational supplies, methodical instructions and scientific articles.

He is married, has a child.