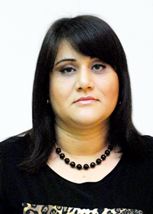 Within 1985-1995 she studied at the secondary school of the village.

In 1999 she graduated from ASUE and became a Bachelor.

In 2001 she graduated from ASUE with honors and became a Master at “Finance-credit”.

In 2001 Gurbanova became a post graduate student of the Scientific-research Institute of Economic Investigations of the Ministry of Economic Development.

She began her activity at BBU as a laboratory assistant in 1999 and then became 0,5 teaching staff of the University.

In the years of 2007-2009 she served at Bank of Azerbaijan OSC as an expert on legal persons and then became a senior scientist at the Department of “Finance and Monetary and Credit Policy” of the Institute of Economics of Azerbaijan National Academy of Sciences.

Currently Gurbanova is a senior teaching staff of the Department “Finance”.

She is the author of 1 textbook, 2 training aids, 8 methodological instruction and syllabuses, 17 scientific articles.