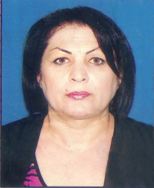 She was born on February 23, 1960, in Bash Dashagil village of Oguz region.

In 1979-1984 she studied in the faculty of Science of commodities of  Azerbaijan National Economy İnstitute (now UNEC) named after D.Bunyadzadekh.

In 1992-1994 she studied at full-time course of postgraduate study of Baku State Institute of Science of commodities and Commerce.

In 1999-2000 she worked as a senior lecturer at  Baku State Institute of Science of Commodities  and Commerce, and in 2000-2005 at the Commercial Department of Azerbaijan State University of Economics.

In 2004 he defended his candidate dissertation on economic sciences.

From 2005 he worked at the department of  Trade. In 2008 he was given the academic degree of associate professor.

Currently he is an associate professor of the department of Economics and Management at UNEC.

He is the author of 1 methodical instruction, 1 textbook, 2 course-books, 50 scientific articles and subject curriculum.