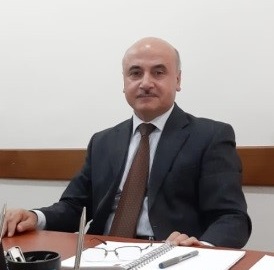 He was born on November 5, 1967 in Amankend village of Bilasuvar region.

In 1984-1991 he studied  at  Moscow State Academy of Management and graduated as an engineer-economist in organization of management.

He began his career in 1991 as the head of the “Information Support” department at the small enterprise “Poisk” in Moscow. Since 1992, he has worked as a senior laboratory assistant, assistant, senior lecturer and associate professor at the department of Industrial Economics and Management of Azerbaijan Technical University, and from 1996 to 2003, he worked as the deputy dean for Academic Affairs of the faculty of Engineering Business and Management. He has been working at the department since 2003, with a staff of 0.5.

In 2003-2006, he worked as a senior consultant in the Economics department of the Ministry of Industry and Energy, during which he worked as a national expert on economics and finance in the Asian Development Bank’s projects “On the use of alternative energy sources”.

In 2006-2010, he worked as deputy chief of the Marketing Department of Azerkimya State Company.

In 2011-2016, he worked at the Training Center of the Ministry of Taxes as an associate professor of “Economics and Management”, head of the “Scientific Research” department and deputy head of the Center for Education.

In 2016, he worked as a state tax inspector of the 2nd department of the audit department in other service areas of the Baku Tax Department under the Ministry of Taxes.

In 2016-2018, he worked as the head of the Planning and Economics Department of Azersu Open Joint-Stock Company.

On 15.09.2020, he was appointed to the position of acting head (0.5) of the Doctoral Department of the International Center for Master’s and Doctoral Studies.

In 1999 he defended his dissertation on “Ways to increase the competitiveness of products” (on the example of home appliances in Azerbaijan) and in 2000 received the degree of Candidate of Economic Sciences in 08.00.05 – Economics, Planning and Organization of National Economy.

Since 2018, he is a doctoral student at the department of “Industrial Economics and Management” of the Azerbaijan Technical University (Doctor of Sciences) and is working on a doctoral dissertation on “Institutional problems of innovation-based industrial development in Azerbaijan.”

He is the author of more than 55 scientific articles published in foreign and local scientific journals.