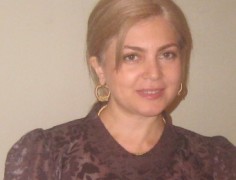 In 1981 she entered the” Finance and Credit” faculty of  Azerbaijan National Institute of Economics named after D.Buniyadzade  (now Azerbaijan State University of  Economics) and graduated in 1985 with excellent marks.

She started her pedagogical activity in 2006. She worked as a lecturer at Tafakkur University and Tourism Institute. In 2010 she defended his dissertation and was a PhD in economics. Since that time she has been working as a senior lecturer at the Department of Finance and Financial Institutions at Azerbaijan State University of Economics.

By 2017, she worked as Associate Professor at the department of   “Finance and Financial Institutions” of UNEC.

At present she is the assistant professor of the chair “Economy” (Russian) of UNEC.

She is the author of 3 monographs, one textbook “Innovation Management” and about 100 articles.

She is married, has two children.