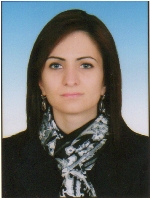 Mammadova Gultekin Gabil kizi was born on January 8 1982 in Baku.

In the year of 2003 she graduated from the Azerbaijan State University of Economics and became a Bachelor.

In 2005 Mammadova became a Master of ASUE with honors.

She began her pedagogical activity since 2005.

In 2007 she became a researcher of the Azerbaijan State University of Economics.

In 2012 Mammadova defended the Candidate’s paper on “Macro-economic Problems of Improving the Financial System” at her major 08.00.01. – “Economic Theory” and got its approval in 2013.

She is the author of 21 scientific works.

She is married, has got 2 children.