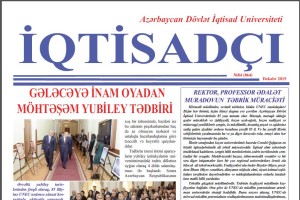 Newspaper was established as the organization of Party Committee, Trade Union and Komsomol Organizations of the administration of the Institute of the National Economy named after D.Bunyadzade (current Azerbaijan State University of Economics) in 1970 and the first volume was published on January 28 of the same year. Although the establishment of the newspaper was considerably later, it has won the sympathy of the professor-teaching staff and the students as well with its rich content, objectivity since the beginning of its establishment. Newspaper took active part in all events of our university within the years of its activity and published broad materials about these events.

Specious place is given to the scientific activity of the University. Conferences devoted to scientific-research works of the professor-teaching staff and Student Scientific Society, scientific seminars, discussions in which professor and teachers take part are gradually interpreted in the newspaper. At the same time articles devoted to different problems of our economy by the professor-teaching staff or excellent students are published. These show that newspaper “Igtisadchi” gave its scientific-practical contributions for the growth of the economy of our country.

Newspaper “Igtisadchi” plays the special role in the administration of the students’ welfare and spare time, formation of ideological and educational work at the university. Accordingly articles about student life, student trade union and student board of governors’ club activities, military patriotism, university’s sport life, club for fun and quick-witted, competitions of knowledge, cultural-mass events and etc. have carries out educational character. To educate the students about their rights in the rubrics “The Survey Corner” answers to questions of the students are published.

During its activity newspaper “Igtisadchi” tried to be the mirror of the university and achieved it partially. Among some rubrics information about the university administration, sighed orders and decrees, programs, textbooks, training aids, library, publish house, laboratories, computer center, chairs, faculties and etc. are published in newspaper.

Being independent newspaper “Igtisadchi” establishes its works according to the university administration. Except these scientific- problematic articles about our economy by correspondent students are very successful.

In 1991 the newspaper “Igtisadchi” became the winner of the competition among the newspapers published in large edition for “the best illuminating the life of the students” and was awarded with the Honored Order and Award of Azerbaijan Union of Journalists and Azerbaijan Trade Union Committee.

Thus newspaper “Igtisadchi” was the winner of the creative competition on “Economic Growth of Azerbaijan” jointly held by Azerbaijan Union of Leaseholders and Entrepreneurs and Azerbaijan Employees of Mass Media in 1994.

In 1994 editor- in- chief of the newspaper and the employees were awarded with the diploma “Azerbaijan Flag” for propagating economic knowledge and intends in solving some socio-economic problems, contribution to the economic and cultural development of the country and personal creativity by the Presidium of Trade Union of the Employees of Mass Media of the Republic of Azerbaijan.

An electronic version of the newspaper “Igtisadchi”