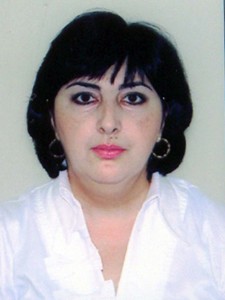 In 1986 she graduated from Azerbaijan University of Languages as an English and German teacher.

Since 2003 she has been working at Azerbaijan State Economic  University  as an English teacher.

She has been a member of Azerbaijan English Teachers’ Association since 2004  (AzETA) and attended several international conferences.

In 2009, 24 April, she received a certificate of Attendance for participating at  “Creative Writing “ workshop held by Professor Mario Rinvolucri, Pilgrims Ltd. UK

In 2010,  she participated at the International Conference held at the Khazar Univercity 13-14 November in Baku and was awarded a certificate.

Since 2013 she has been working as an expert for Master and Bachelor departments at the State Examination Commission.

In 2016 she attended “American English Webinar Series” course organized by Bureau of Educational and Cultural Affairs U.S. Department of State at the State University of Languages held by Kevin McCaughey and completed 5 weeks of professional development work and was awarded a certificate.

From February 19 to May 27, 2016 she attended the U.S. Embassy’s “Discover America” Educational Program held by Amy Petersen, Cultural Affairs Officer U.S. Embassy at the State University of Languages and was awarded a certificate.

2017,8 April  she was awarded the certificate of Participation at the 1st Annual International XX1 Century Teachers’ Conference held by Virgil Tanner.

In April 21, 2017 she participated at the International Conference on “ Effective Ways of Teaching Foreign Languages in Informative Society” held at  Baku Business University and was awarded a certificate.

She is an author of several articles published in different scientific journals.