A well-known psychologist visited the Russian School of Economics

Meeting with a well-known psychotherapist Elmir Akbar has taken place in the Russian School of Economics.

Director of the Center, Assistant Professor Mansur Barkhudarov noted that everyone has a psychological support and that young generation should especially be educated in this area.

Elmir Akbar made a speech on “mutual relations: perfect yourself”. First of all, he demonstrated two short films showing the basic contradictions of human relations visually. The psychotherapist revealed the basic principles of ensuring harmony in the relationship ob the basis of the two plots.

Students’ questions were responded in the end. It was decided to organize the kind of meeting regularly. 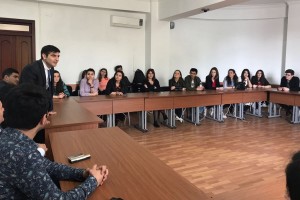