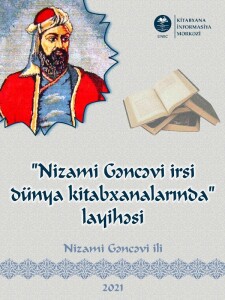 Within the project dedicated to the “Year of Nizami Ganjavi” research work, scientific research on the legacy of the great Nizami in Azerbaijan and around the world, as well as bibliographic information about the author’s works and publications in various languages in a number of leading libraries around the world  will be made available to the public.

In the first issue of the project, UNEC LIC presents the information available in the US Library of Congress. According to the search of LIC, a bibliographic record of 329 works on the legacy of Nizami Ganjavi has been obtained in the Library of Congress. These works were published and recorded in different languages in Baku, New York, London, Paris, Rome, Stockholm, Leiden, Moscow, St. Petersburg, Tashkent, Delhi, Dushanbe, Tehran.

The study revealed that the oldest manuscript preserved in the Library of Congress is the 18th-century (1750) Iskendername, which is believed to have been translated into Persian in India. The latest publication is” Leyli and Majnun”, published in New York in 2021. It should be noted that there are also  audio publications.