The 5th reporting-election conference of the Student Trade Union Committee was held at UNEC. Vice-rector of UNEC for Students’ Affairs Saadat Gandilova, Deputy Chairman of the Republic Committee of Azerbaijan Independent Trade Union of Education Employees Mirze Jafarzade and students participated in the conference.

The TUC Chairman Rufat Suleymanli made a report about his performances within five years. Then the report made by the Chairman of the Audit Commission of the TUC was heard. Vice-rector S.Gandilova evaluated the affairs performed by the TUC within five years highly. She said the students who are the members of the committee took active part in the social life of the university, represented UNEC in the competitions and contests held among the universities decently.

M.Jafarzade assessed the TUC’s activities positively and recommended the new staff to be elected to take care of the students and ensure the efficiency of their spare time. In addition, he urged the students to be active in the development of our statehood.

Afterwards, the new staff of the TUC was elected by voting. Election of the new TUC Chairman was held in the end. R. Suleymanli’s candidacy was brought again. Rufat Suleymanli was elected a Chairman of UNEC’s TUC again by the majority of votes https://roulette-en-ligne.ca. 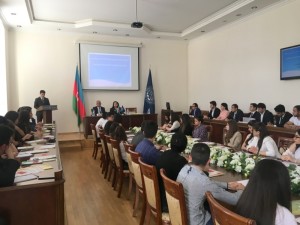