The January 20 Martyrs were commemorated in Zagatala Branch of UNEC

Conference on “Day of National Pride” has been devoted to the 27th anniversary of the January 20 tragedy in Zagatala Branch of UNEC.

The martyrs’ memory was honored with a minute’s silence before the conference.

Director of the Zagatala Branch, Professor Orujali Rzayev informed the participants of the event about the history of the January 20 incidents and emphasized the savage terrorist attack committed by the former Soviet Empire as the worst crime against humanity. O. Rzayev brought to attention that the January 20 tragedy was first time given political and legal assessment by the National Leader Heydar Aliyev, that victims of the tragedy are honored at the state level and that the policy is successfully continued by the President Ilham Aliyev today.

UNEC’s teaching staff Agil Mammadov, senior teacher of the Department of “General Subjects” Rena Aliyeva and Khazangul Babayeva shared their views about the January 20 tragedy and emphasized the memory of the Azerbaijani martyrs would never been forgotten.

A film dedicated to the tragedy of January 20 was demonstrated after the speeches. Poetry compositions prepared by the students were sounded. 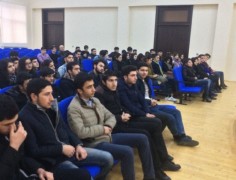 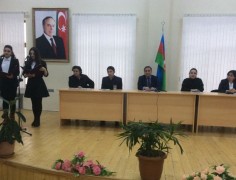