The fist Conference of the Supreme Body of the Student Scientific Society has been held at Azerbaijan State University of Economics (UNEC). The conference was attended by the Heads of the university faculties and departments, scientific supervisors and members of the SSS on structural units.

A Vice- rector Students’ Affairs, Associate Professor Saadat Gandilova introduced to the participants the SSS’s Action Plan adopted by the UNEC Academic Council. Speaking about the significance of the document, Scientific Supervisor of the SSS, Associate Professor Emin Garibli made a proposal on establishing the coordination board of the society. Then the actions and proposals arising from the actions plan were discussed within the conference.

Views on the organization of joint seminars and conferences to improve the society’s performances and master- classes by the famous scholars were made as a result of discussions. 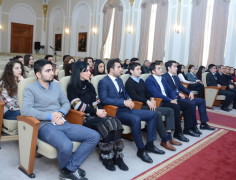