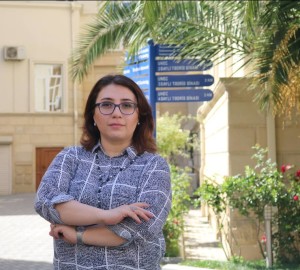 In 2001-2005s she was an undergraduate student of the State Academy of Administration under the President of the Republic of Azerbaijan.

A.Abdulova became a Master of the Azerbaijan State University of Economics with honors in 2008.

She served at the Department of Operations of Bank of Baku OSC in 2006.

She was a senior laboratory assistant of the Department of “Business Management” in 2010-2013.

She is an assistant teaching staff of the Department of “Business Management” since 2013.

Abdulova is also a researcher of ASUE since 2011.

She is the author of 20 scientific works, 13 of them are articles (3 were published abroad), 4 theses, 3 are textbooks.

A.Abdulova got her Master’s degree with the organization of Projects Management, Professional Development Program, School of Project Management, George Washington University and the University of Khazar in 2012-2013.

She was a General Secretary and member of the organizational committee of the International Conference on “Business Administration and Corporate Social Responsibility” held at ASUE on November 23-25, 2012.

Her article was published in the IMPACT factor magazine Impacting of Human Resource Department’s Career Developing Strategy to Firm’s Competitive Power (In Azerbaijan Firms Example)” of the 15thIAMB Conference held in Lisbon of Portugal in April of 2013.