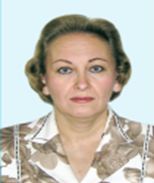 Mammadova Svetlana Yevgenyevna was born on April 1 1962 in Tumen, Russia. Within 1969-1979 she studied at the secondary school.

In 1980-1985s she studied at the School of “Economics” of Moscow State University named after M.V.Lomonosov.

In the year of 1990 she began her activity at Azerbaijan Agricultural Institute as a teacher. Within 1994-2000 she served at the Institute of International Management and Business.

S.Y.Mammadova is married, has got a son and a daughter.