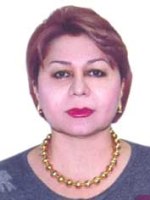 She   was born on January 23, 1961 in   Beylagan district of the Azerbaijan Republic.

In 1983 she graduated with honors from   Azerbaijan Institute of National Economy named after D. Bunyadzade (now Azerbaijan State   University of Economics) and worked as a specialist at Baku city Trade Office.

In 1984-1988 she worked as a head of department at Youth Committee of October (Yasamal) district of Baku.

In 1988-1995 she worked as a methodist-teacher at the Baku Soviet Technical School of   Trade (now Baku Commercial College).

In 1997 she worked as a leading specialist at the Azerbaijan Foreign Trade Union.

From 1998 she worked   as a lecturer, but in 2001 -2017 as a senior lecturer at the department of “International Economic Relations” of   Azerbaijan State University of Economics.

Since 2017, she has been   a senior lecturer of the Department of Economics at UNEC.

She is co-author of the textbooks “World Economy”, “International Economic Organizations”   and   educational program on the subject Foreign Economic Advertising.

She is married and two children. 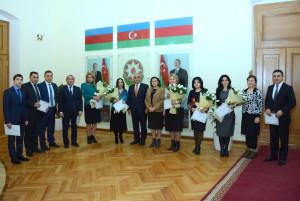