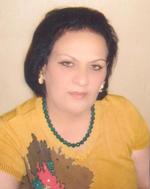 She was born in 1948 in Zardab district.

After graduating with honors from the same institute in 1970, she was appointed to lead a short-term course under  Baku Industrial Goods Department.

In 1971, he was admitted to the department of “Commodity Science of Industrial Goods” of the University of Economics through a competition.

She has been working as a senior teacher since 1982 and as an associate professor since 1991.

In 1973, she entered full-time graduate school of the Moscow Institute of National Economy named after G.V. Plekhanov (now the Russian Academy named after GV Plekhanov).

In 1981, she defended his dissertation and was awarded the degree of Candidate of Technical Sciences.

In 2000, she was named Professor of the International Energy Academy.

In 2001, her name was included in the “Woman of the XX century”, “Azerbaijan Encyclopedic Collection”.

She is currently an associate professor of “Consumer Goods Expertise”.

She is the author of more than 106 textbooks, teaching aids, programs, methodical instructions and scientific articles.