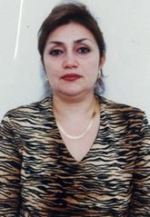 In 1959 she entered the secondary school No. 1 of that city.

She left school in 1969 with a golden medal.

In 1969 she entered  Azerbaijan Polytechnic Institute (now  Azerbaijan Technical University), in 1974 she graduated from the Institute of Technology. After graduating from the institute, she was sent to work in the Azeri Union.

In 1985-1988, she studied at the pedagogical faculty of  Moscow Cooperative Institute, specializing in food commodity science.

Since 2010, she has been a senior lecturer at the department of” Commodity Science and Expertise of Food Products” of  Azerbaijan State University of Economics.

2 textbooks, 1 methodical instruction, 7 programs, 10 scientific articles of hers have been published.

She is married, has two daughters and grandchildren.