In 1974-1984 she studied at the secondary school No. 134 of the Sabail district of Baku. In the same year he entered the faculty of Biology of  Azerbaijan State University named after S.M. Kirov (now Baku State University) and graduated with honors in 1989. From that year she worked at the Azerbaijan Institute of Botany as a senior laboratory assistant, junior researcher and researcher. She conducted scientific research in 1992, defended her dissertation in 1997 and received the degree of Candidate of Biological Sciences.

Until 2020, she has been an associate professor of “Food Technology” at UNEC.

She is currently an associate professor at the department of “Engineering and Applied Sciences of  UNEC.

She has made reports at a number of international and national conferences and symposiums and has been awarded a diploma.

On March 8, 2010, on the occasion of International Women’s Day, she was awarded the Honorary Diploma of the University of Economics.

She has about 90 scientific and methodological works. She is the author of 20 subject programs, 2 methodical instructions, 1 textbook and 4 textbooks..

She was elected a “quality ambassador” to improve the quality of education at Azerbaijan State University of Economics (UNEC), to identify existing problems in the process of its organization.

She is married and has a daughter. 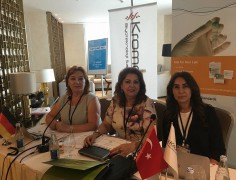 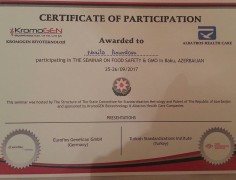