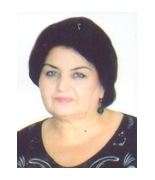 In 1966 she graduated from Lankaran city school № 1.

In 1967   she entered the faculty of Technology of Azerbaijan Polytechnic Institute (now Azerbaijan Technical University).

In 1974-1999 she worked as an engineer, researcher and teacher   at various institutions.

In 1999, she worked as an   hourly-graff   lecturer at   Baku State Commodity Research and Commerce Institute.

At present she is the senior teacher of “Design” department.

She   is married, has four children and grandchildren