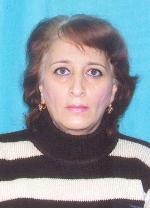 After leaving    secondary  school in 1981 with honors, in the same year she graduated with honors from  Azerbaijan Institute of National Economy named after D.Bunyadzade (now  Azerbaijan State  University of Economics), faculty of Commodity Studies, majoring in non-food commodity and trade organization.

In 1985-1989 she worked as a chief commodity expert in the “Sharq” shopping center, in 1988-1990 she worked as a senior researcher at the Institute of Management under the Council of Ministers.

In 1990-1991, she worked as a senior researcher at the Scientific Research Institute, which studied the conjuncture needs of the population, and in 1991-1999, she worked as an economist at the Khachmaz Cannery.

Since May 2000, she has been working as a senior lecturer at the department of “Commodity Science and Expertise of Non-Food Products” of the University of Economics.

She is the author of 20 theses, 1 program and 1 textbook.

She has a daughter.