The Brazilian universities are interested in the coopertaion with UNEC 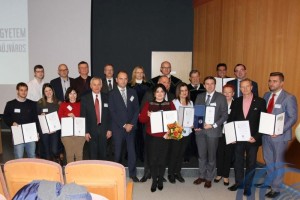 Within the framework of the visit, the UNEC teachers also had participated in the international conference on the topic “Eastern-Western approach” held   at the University of Dunaujvaros.

In the conference attended by the scientists from Hungary, Russia, Romania, Brazil and China, L. Hajıyeva had spoken on the topic “Main trends of tourism development: youth tourism” and Z.Nacafova had made a report on the topic “Development of support infrastructure systems for SMEs in Azerbaijan”.  The speeches of the UNEC teachers had caused the extensive discussions and they were awarded the “Interesting report” certificate of the conference.

The goal of the conference was to strengthen the international coopertaion among the higher educational institutions, the promotion of the contemporary educational models, the development of the scientific coopertaion, the acquaintance with the scientific research analysis of the research workers and the doctoral students. The  UNEC teachers had made the presentation on the Azerbaijan State Economic University, the largest economical university in the South Caucasus. The delegation of the higher educational institutions of Brazil had shown the interest for the activities and achievements of UNEC and expressed the intention to cooperate efficiently with UNEC. They had expressed their assurance of success of this partnership and suggested to develop the joint projects with UNEC.

The UNEC brand is recognized in Europe
Astrakhan State University will cooperate with UNEC
UNEC will cooperate with Gaydar Institute of Russia
International Conference is held on “Digital Economy: Modern Challenges and Real Opportunities”
«Triangle of education» : A special program dedicated to the 90th anniversary of UNEC
UNEC jumps 497 steps in the world rating
ALL NEWS