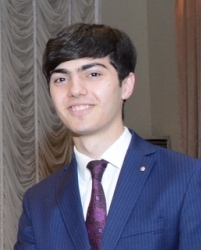 He is majoring in Finance in the Faculty of Finance and Accounting.

J.Huseynli became the winner of a series of intellectual competitions within his studies: double winner of Azerbaijan championship on “I am Azerbaijani” joined by 400 young people, I place of the intellectual game “What? Where? When?” for N.Narimanov Cup” realized by Narimanov district EP and the Ministry of Youth and Sports; I place of the granting knowledge rivalry “My Independent Azerbaijan” of the Youth Foundation under the President; I place of Azerbaijan championship for the “Confederation Cup” organized by the Ministry of Education and Azerbaijan Trade Union Confederation. He became a fivefold republic champion, achieving I place among 46 higher educations within the Republic- wide championship “H. Aliyev and Azerbaijan History” implemented by the Education Ministry and the H. Aliyev Foundation. He attended an official reception held by the President Ilham Aliyev in connection with the 20th Anniversary of Azerbaijan Youth Forum. He is awarded “Youth Award 2017” on the occasion of the Youth Day on February 2 2017.

He is elected a Student Rector of UNEC in 2017.

He was rewarded with diplomas and awards for the achievements gained by UNEC Rector, Professor Adalat Muradov within the Academic Board’s sessions. 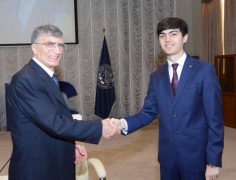 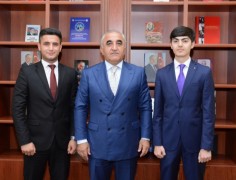