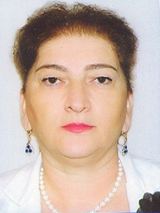 In 1972 she finished secondary school 198 in Baku and entered the Azerbaijan Pedagogical Institute of  the Russian Language and Literature named after M.F.Akhundov (now Slavic University).

In 1980, she was appointed as an inspector of the Executive Committee of Lenin (present Sabunchu) district of Baku.

In 1984-1987 she worked as a teacher-organizer in the General Construction System in Moscow.

In 1988   Sara Jalilova   was appointed as the head of the department of social provision of the executive committee of Lenin (present Sabunchu) district of Baku.

Since 1996 she has been working as a sociologist-interpreter in the Chief Repair and Construction Department of Baku City Executive Committee.

She currently works as an interpreter at the UNEC Translation Center.

Her 34 articles were published in different journals.