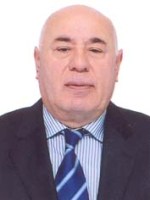 He served as a worker in the repair-construction workshop of a diary enterprise of Baku in the years of 1970- 1973.

Within 1973- 1978 he studied at Azerbaijan Institute of the National Economy named after D.Bunyadzade (current Azerbaijan State University of Economics).

Became part-time post-graduate student of Azerbaijan Institute of the National Economy in 1982-1986.

He became the Candidate of Economic Sciences after the defense of his thesis in 1989.

Within 1978-1998 served as a teaching staff of the Department of “Political Economy” of Ganja Institute of Agriculture named after S.Aghamalioghlu.

In the years of 1992-1998 was the Head of the Department “Economic Theory” of Azerbaijan Academy of Agriculture.

He is an Associated Professor of the Department “Management” of Azerbaijan State University of Economics since 1991.

He was a Chairman of Household Industrial Gas Joint Stock Company within 1998- 2005.

Currently he serves as a Deputy Dean of the School of Business and Management.

He is the author of 33 scientific, scientific- methodological works and textbooks.