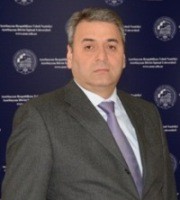 He graduated form Azerbaijan State Institute of Economics, the department of Account-economics in 1994.

Graduated from post-graduate degree of the same Institute in 2005 and defending dissertation get the title of candidate on economic sciences. Graduating International law department of International Relations Institute of Kiev National University named after Taras Shevchenko in 2007, he get the Master’s degree on international law qualification.

He is the author of more than 50 scientific and training -methodical articles, including 1 textbook, 8 training-methodical manuals, 20 educational programs, 20 scientific articles and 7 thesis.

Married. He has four children.