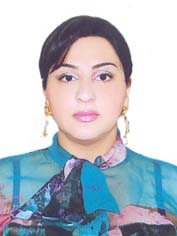 In 1995 she studied at the Philological Faculty of Baku State University (bachelor’s degree).

In 1995-2001 she studied at the master’s   degree of philology faculty and graduated with honors diploma.

She worked as a lecturer at the department of “Ancient and Medieval Azerbaijan Literature” at Baku State University.

She has been engaged in scientific activity at   Institute of Manuscripts named after M.Fuzuli of the Azerbaijan National Academy of Sciences.

She has defended her candidate thesis and was awarded with the academic degree of PhD in Philology.

In 2005 she worked as an inspector at the Foreign Students Preparation Department of Azerbaijan State   University of Economics.

In 2006, she was appointed as a teacher of the department of “Azerbaijani Language” at UNEC.

At present she is the senior teacher of the chair “Azerbaijani language”.

She is married,   has two children.