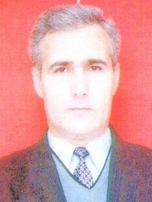 I, Bahruz Adil Samadov was born in 12.04.1953 in the village Konakhkend of the district Guba.

In 1975, in connection with my marriage from the Davachi district, I continued my job on the appointment until 1977 in the same district.

From 1981 to 1982 I worked as an agent for the supply of the Azerbaijan State University.

From 1982 to 1991 I worked as a designer, translator, teacher, chairman of the Trade Union at the Institute of Physics of the Academy of Sciences.

From 1991 to 1993 I worked as a teacher at the secondary school number 158 and as an inspector of the Yasamal district on English.

In 1993 I graduated from the course of improving the publication of textbooks at the University of Nottingham in the United Kingdom and received a certificate.

From 1993 to 2001 I worked as a senior lecturer and a Chair of the Department at the Institute of Management of the National Economy at the Cabinet of Ministers of Azerbaijan Republic.

Since 2001 I have been working as a senior lecturer at the Department of Foreign Languages-2 at the Azerbaijan State Economic University.

In 2011 I defended my thesis on the topic “Taxis in Azerbaijani and English” and was awarded with the title of Doctor of Philosophy on Philology. I am the author (2) of two theses, (3) three teaching aids (12) twelve articles (4) four teaching aids and (1) one monograph.

In 2012 I received the diploma of Doctor of Philology on Philology.

In 2016 I received the diploma of the Associate Professor.