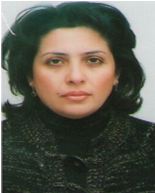 Within 1980-1990 she studied at the secondary school of Kamarli village.

In 1990 she graduated from the Technical School of Accountancy.

Hakimova began her labor activity as a bookkeeper at the Department of Accountancy of ASUE in 1993.

Within 1996-2003 she served as a senior laboratory assistant, in 2003 a temporary teaching staff of the Department of “Finance”.

Since 2004 she is a permanent teaching staff of the Department “Finance”.

In 2011 she became a doctoral researcher of ASUE.

She is the author of 1textbook, 1 training aid, 4 methodological instructions and syllabuses, 5 scientific articles on financial and budgetary problems.

Hakimova is married, has got two children.