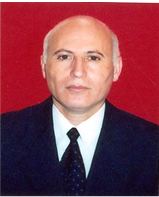 Ashurov Ali Sari oghlu was born on August 14 in Gazakh region. He finished Azerbaijan Institute of the National Economy named after D.Bunyadzade in 1966-1970s.

Within 1974-1977 he was the postgraduate student of Moscow Cooperation Institute, defended the Candidate’s paper in 1982.

He works as a teacher in Azerbaijan State Economic University since 2001.

He is married, has 2 children and 1 grandchild.