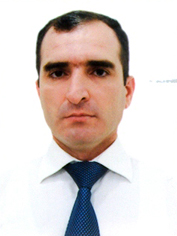 He was born on  September 19, 1972 in Garazanjir village of Jalilabad region.

In 1994 he graduated from the Azerbaijan State Economic Institute (now Azerbaijan State University of Economics). He was a post graduate student of the same institute in 1994-1997, defended his candidate dissertation in 2000. He is a candidate of economic sciences.

From 1998 to 2000, he worked as senior laboratory assistant of the department “Economy of the Industry” at the Economic University (present-day “Economy of enterprse” department),  2002 – senior lecturer, associate professor of “Economy of the enterprise” chair.

Currently he is an associate professor of  “Economics and Management” chair.

He is the author of more than 15 scientific-methodical works.

He has been a co-ordinator, group leader and expert in projects on Azerbaijan’s social and development problems in 2004-2010, including projects financed by international organizations and where international experts participated.