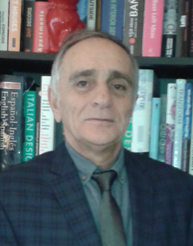 In 1972 he graduated from the mathematics faculty of   Azerbaijan State Pedagogical Institute.

In 1974-1981 he worked as a junior research worker at the “Laboratory of Optimization of Macroeconomic Systems” of Cybernetics Institute of ANAS.

In 1977 he entered the postgraduate study of the Department of “Economic Cybernetics” of Azerbaijan Institute of National Economy   named after D.Bunyadzade  (UNEC) and graduated in 1981.

In 1983 he defended candidate dissertation on the specialty 08.00.13 – “Economic-mathematical methods”   titled  “Econometric model of development of non-production spheres of the allied republic” at the Specialized Scientific Council of the Cybernetics Institute of ANAS.

In 1981-1991, he worked as the head of the PHAS department   at the Accounts Center under   State Planning Committee.

In 1991-1995, he worked as the head of department at Scientific Research Institute (later Center for Economic Reforms) under the State Planning Committee.

In 1996-2005 he worked as the head of the Computing Center at Higher Diplomacy College, Dean of the faculty   of Economics and Law.

From 2006 to 2014 he worked at as Associate Professor of the department of “World Economy” at   National Aviation Academy, dean of the faculty of “Economics   and Law”.

From July 2014, he is the Deputy Director of the Center for “Distant, Correspondence   and Additional Education”.

He is the assistant professor of the department of “Theoretical and practical economy” in the 2014-2017, and from September 2017 – “Economy” chair of RSE.

He is the author of 70 articles, 2 textbooks, 4 monographs.

Participated in the project of the Royal Academy of Spain under the leadership of Nobel Prize laureate Finn E. Kidland on “New Markets for Economy Revival: Azerbaijan” (2011).

He is a foreign professor of   Barcelona School of Business and Social Sciences.

He is the head of the “General Economics” section of the Standing Scientific Seminar under the UNEC Dissertation Council and a member of the Commission for Examination of Documents to be submitted to the HAC.

UNEC’s Associate Professor is selected the Professor of the Prestigious European University  (30.11.2016)