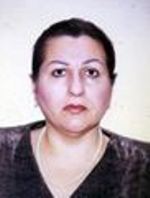 In 1982 she graduated from Azerbaijan Institute of National Economy named after D.Bunyadzade.

In   1982 she worked at the Ministry of Transport of Azerbaijan SSR.

In 1984 she entered the full-time   post graduate course of   Azerbaijan Institute of National Economy after D.Bunyadzade.

In 1989, she defended her candidate   dissertation at  Leninqrad Institute of Finance and Economics named after N. Voznesensky.

Since 1989 she has been working as a teacher at the department of “Economics and Organization of Labor”.

Currently she is Associate Professor of the department of “Economics” at the Russian School of Economics.

During his labor activity  she has been  the author of scientific works, published articles, programs, methodical instructions and textbooks of them.

In 2013 the textbooks «Основы организации труда» and «Управление персоналом» have been published.

She is married and has 2 children.