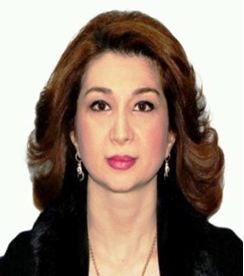 Afag Jamaladdin Huseyn was born in 1972 in Baku in a family of scientists. In 1989 she graduated from high school with a gold medal, in 1994 she graduated from Azerbaijan State Economic University with honors in the specialty “Pricing”. In 2000 in  Bakudefended her dissertation at the one-time council with the participation of 3 foreign experts, including Corresponding Member of the Russian Academy of Sciences, V. Esipova, and received a PhD degree in economics. In 2007 she received the scientific title of associate professor. She is a certificate holder of the DBB Akademie and GİZ “Staff Appraisal System”, the HAUS Finnish Institute of Public Management, Center for Adaptation of the Civil Service to the Standarts of the Evropean Union and National Agency of Ukraine on Civil Service.

Huseyn has a 24-year scientific and pedagogical experience. From 1994 to 2013 she worked as an assistant, senior lecturer and associate professor of the ASEU, scientific secretary of the Scientific Council of the Faculty of Economic Regulation, scientific secretary of the University’s Methodological Council. In 2013-2017, she worked as Head of the Department for Human Resource Management and Public Service Recruitment in the Civil Service Commission under the President of the Republic of Azerbaijan. During this time, she developed and applied a system of compliance with the requirements of vacant civil service positions and higher education specialties.

She is the author of 46 scientific and methodological works, including 6 textbooks covering such research areas as public administration, civil service, state and legal regulation of the economy, state economic policy, pricing, human resource management.

She a participant of more than 30 international conferences, was the speaker of the Eurasian Forum on Social Sciences (EFSS 2012) and the speaker of the VII Astana Economic Forum (2014). She also is a member of the working group on public administration reforms in the programs – of the EU Eastern Partnership Program “Democracy, Good Governance and Stability” of the Working Group on Public Administration Reform and, joint projects of GTZ Germany, programs of SIGMA of the European Union. Since 2015, she is a doctoral candidate at the ASEU (in the degree of Doctor of Economics).

Currently she is an associate professor at the Department of Economics and Business Management at UNEC Business School.