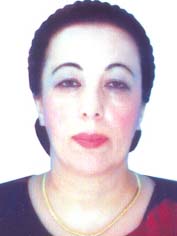 In 1970, she graduated from   Azerbaijan   Institute of National Economy   named after   D. Bunyadzade (now Azerbaijan State   University of Economics).

In 1977 she defended her dissertation at Moscow Plekhanov Institute. She   is a candidate of   economic sciences.

In 1978 she worked as a senior lecturer. But since 1990 she has worked as an associate professor.

50 articles and theses of   hers   were published in the country and abroad.

She   is married, has two children and  a  grandchild.