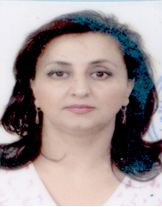 Novruzova Sevinj Azim kizi was born on March 7 1968 in Baku. Within 1985-1990 she studied in the Faculty of “Non-food Commodity Research” of Azerbaijan Institute of the National Economy named after D.Bunyadzade.

In 1999 she became a nominee doctor of the Institute for Labor and Social Problems of the Republic of Azerbaijan.

In 2003 she defended the Candidate’s paper.

S.A.Novruzova had been working in the positions of the Secretary of the Committee, Chief Economist and Head of Sector.

Since 1998 she worked as a teacher, senior teacher in Azerbaijan State Economic University. At present she is the Assistant Professor of the Chair “Marketing”.

She is married, has 2 children.