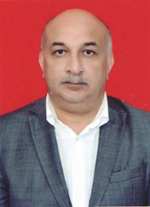 1988-1992 – studied at post graduate course   of the Cybernetics Institute of Azerbaijan National Academy of Sciences.

On June 26, 1992   he defended his thesis on   “System of analytical and forecast models of agricultural enterprises in transition to market relations”. He is a candidate of economic sciences.

1991-1994 – Responsible Secretary of the Republican Council for Scientific and Technical Work of the Ministry of Education;

2001-2007 –   senior   lector of “Organization of business” chair of Azerbaijan State University of Economics;

2007-2014 – worked as a scientific secretary, dean, head of the department at Academy of Public Administration.

Since 2014 is an Associate Professor of the department of   “Management “   of  UNEC.

Until October 2018, he worked as Deputy Director of the UNEC Center for Graduate Studies.

He is the co-author of over 40 scientific and methodical works, including “Basics of Business”, “Controlling in Business”, “Innovation Management”. He has written scientific articles on the formation of national innovation system in Azerbaijan and abroad.