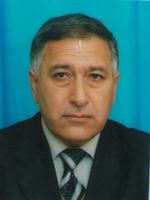 In 1969 he finished the secondary school of Ardanish village of Goyche region and entered the Institute of the National Economy named after D.Bunyadzade.

In 1973 he graduated from the Institute.

In 1978 B.S.Gurbanov began his activity with trade system.

In 1982 he served in the field of insurance.

Within 1986-1992 Gurbanov served as a senior laboratory assistant, then the teaching staff, senior teacher and the Associate Professor of the Department.

In 2007 he defended the Candidate’s paper on “Problems of the Public Budget Formation”.