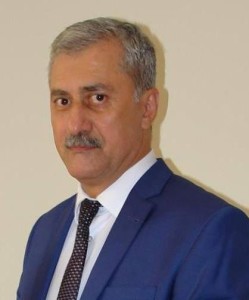 Khankishiyev Khankishi Samad was born on April 28 1952 in Sabirabad region.He studied at the secondary school within 1959-1969s.

In 1969 he entered to the School of General Economics of Azerbaijan Institute of the National Economy named after D.Bunyadzade and graduated from in 1974 with the specialty “economist, teacher of political economy”.

He studied at the correspondence post graduation of Baku State University on political economy. Kh.S.Khankishiyev supported his Candidate’s paper on Political Economy at Moscow State University named after M.V.Lomonosov in 1987 and got the title Candidate of Economics. He became an Assistant professor in 1988.

Kh.Khankishiyev had worked as a Dean of the Pre-graduate Faculty of the university within 1993-2005. Since 2005 he has been serving as a Dean of the School of Business Administration. He is the member of the Scientific Council for the institute since 1993, sine 2000 of the university.At the time he is the member for the commission of the Ministry of Education of AR on conducting higher educational schools to credit system and the Scientific Council of the Institute for Educational Problems. He was awarded with the badge of “advanced person of education” of Azerbaijan Republic for his achievements in the field of education in 2007.

Kh.S.Khankishiyev was the participant of different international conferences, as well as the “World Economic Forum” held in Qatar in 2010 and the “10th Doha Forum”.