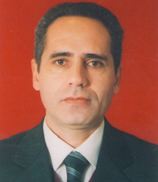 Kheyirkhabarov Ismayil Mahmud oghlu was born on March 20 1965 in Sagarejo Yor-Mughanli village of the Republic of Georgia.

He entered the faculty “General Economy” of Azerbaijan Institute of the National Economy named after D.Bunyadzade in 1983. After the first course he went to the military service. He graduated from Baku branch of Leningrad Financial-Economic University named after N.A.Voznesenski with the honorary diploma in 1990.

Since 2000 I.M.Kheyirkhabarov had been working as a senior teacher of the Chair “Marketing” of Azerbaijan State Economic University and at present he is the Assistant Professor of the Chair.

He is the author of more than 40 scientific works, programs, methodological and training aid.