He is the author of more than 25 scientific and methodological works concerning the urgent problems of the national economy.

Farrukhov Akif Hamid oghlu was awarded with the medal of “Progress” for his contributions to the development of Azerbaijan Economy by the Presidential Decree of the Republic of Azerbaijan on November 12 2012. 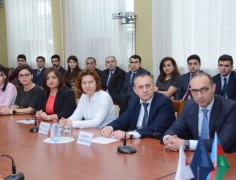